Morrill Hall, the present-day home to the OSU English Department, is one of the oldest buildings still standing on the OSU-Stillwater campus. However, looking at the magnificent architecture of the building’s construction, the casual observer might be oblivious of the obstacles that had to be overcome in order to ensure the construction and maintenance of the building. Meeting the challenges of Morrill Hall would affect and guide the history of the campus that would eventually become Oklahoma State University.

The first hurdle in Morrill Hall’s construction was simply securing the basic funding. In 1902, Oklahoma Agricultural and Mechanical College (OAMC) President Angelo C. Scott, who served from 1899 – 1908, proposed the construction of a main building that would house departments in agriculture, administration, and the experiment station. At the time, however, there was a fierce and heated political debate revolving on where to place the capital of the future state of Oklahoma.

These political maneuverings had prohibited any funds from being used for construction of new buildings at a public institution. Undaunted, President Scott made a special trip to Washington D.C. in January 1905 to acquire a Congressional exception to this new rule. In his discussions, he referred to the new building as Morrill Hall, in homage to Justin Morrill’s Act, which established the land-grant system. This appeal moved several key members of Congress to look favorably on OAMC’s building project, and on February 16, 1905, U.S. President Theodore "Teddy" Roosevelt signed the Scott-Fields Bill, which provided the necessary federal funds for the new building. 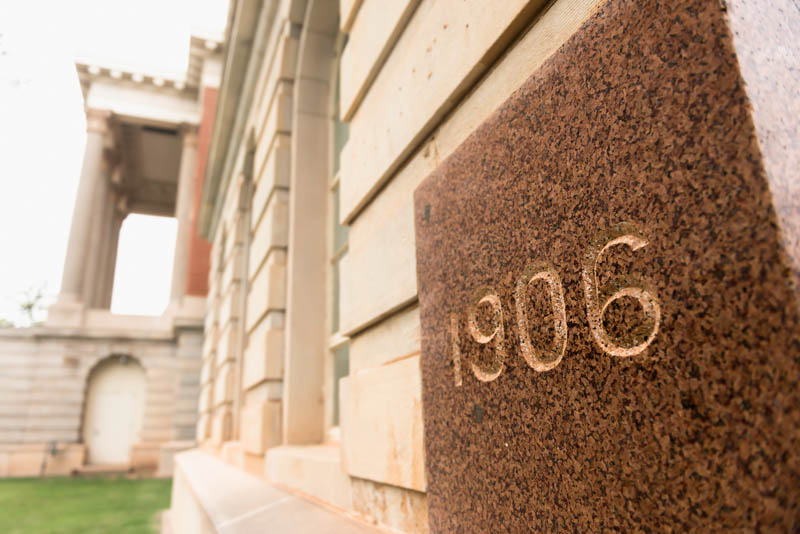 Riding on this success, President Scott proceeded to persuade Oklahoma assembly members to allocate $100,000 for an agricultural building, engineering building and a gymnasium. Proposals for the construction of Morrill Hall were presented at the board of regents meeting on October 30, 1905. The total bill for the building’s construction came to $78,000 (More than $2million in today’s currency). However, it was not until On January 15, 1906, that the first cornerstone was laid for the officially-titled Morrill Hall. After only nine months of construction, Morrill Hall was completed in October 1906. Consisting of three floors, its original dimensions measured 76 ft. in width and 160 ft. in length. Its stone and brick design, as well as its columns, would become a popular architectural feature with future construction on the OAMC campus (which can be seen even today in the design of the new building for the Spears School of Business). The administrative offices of the college were based there, along with modern, updated classrooms.

After only seven short years of use, tragedy in the early morning of August 7, 1914. In the early hours of the morning. a fire was reported on the top floor of the building and a fire whistle rang through the night. Efforts were made to save records and items from the lower floors as volunteer firefighters valiantly battled the blaze. However, due to an exceptionally dry summer, water pressure was lost and the water supply eventually exhausted. With nothing with which to fight the fire, the firefighters evacuated the building as the floors collapsed one by one, leaving only the exterior walls standing. Miraculously, no injuries were reported.

Acting OAMC President Lowry Lewis assured the college that classes would open in September as scheduled. Departments and classes that were displaced by the Morrill Fire were quickly and efficiently relocated to different locations across campus and in only a little more than a year, Morrill Hall was renovated and reconstructed by September 1915.

In the aftermath of the 1914 fires, Lewis introduced a new fire-training program at the college, eventually resulting in the formation of Boomer Lake as a necessary water source for the college, as well as the construction of the Campus Fire Station.

Over the next several decades, Morrill Hall several departments came and went through Morrill Hall. The administrative offices shifted to Whitehurst Hall in 1926, and as more and more buildings were constructed (all at least partially based upon Morrill’s signature architecture) Morrill was home to the agricultural division, the extension service, commerce, education, foreign languages, physics and correspondence all in their turn.

Today, Morrill Hall stands as an resolute reminder of challenges faces and challenges overcome. Its construction set the tone for the future building projects on campus, and set Oklahoma Agricultural and Mechanical College on the path to becoming a fully-fledged university. It stands as a monument to Cowboy Pride and the indomitable spirit of the College of Arts and Sciences.