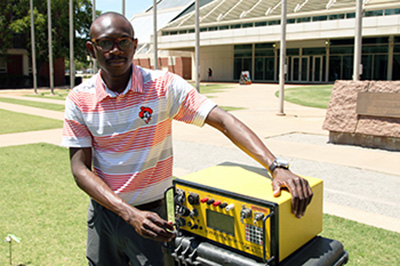 The occurrence of such a powerful earthquake also provided an OSU research team, led by recent Master’s recipient Folarin Kolawole, a unique opportunity to chart how the earth is susceptible to change under the stress of seismic events.

In a paper published in an upcoming issue of “Seismological Research Letters,” Kolawole details how his team used the measurement of geoelectrical resistivity to map ground conditions susceptible to liquefaction during an earthquake.

“The imaging of ground conductivity also allowed us to investigate a bigger research problem of what the near-surface structure of an earthquake damage zone looks like,” Kolawole said. “This is important because whatever engineering infrastructure, such as buildings and roads, that you put on these areas could be affected by the damage done below the surface. This is simply because underground damage zones constitute zones of ground weakness that could generate stresses that could be transferred to the surface.”

In powerful earthquakes, areas of earth and soil can undergo liquefaction, a phenomenon where soil that is partially or fully saturated with water can lose cohesion during a quake, causing the ground to behave like water. In Pawnee, this phenomenon led to visible signs of damage to the terrain not normally seen in Oklahoma quakes, including surface fractures, sand blows, and lateral spreading.

Following the Pawnee quake, Kolawole and his team used high-resolution electrical resistivity imaging to map sites where these liquefaction damages occurred and to examine the underlying ground. As a result, they found that sites which contained unconsolidated river channel deposits of Quaternary age are susceptible to liquefaction during a powerful quake.

Quaternary river channel deposits are deposits of sand, gravel, silt, and clay, usually found within underground layers. According to Kolawole, the findings he and his team have described could have financial implications affecting things such as insurance rates for people building homes, businesses, and infrastructure throughout the state, by identifying land susceptible to surface damage in large quakes.

Kolawole further suggests that the technique used and other forms of high-resolution geophysical imaging could be useful as tools for evaluating areas susceptible to quakes, and other hazard mitigation efforts.

The article was published in the May 2017 early publication edition of Seismological Research Letters. For more information, visit srl.geoscienceworld.org.