What do an opera singer, a mixed martial arts world champion, a historian, and an internationally revered physicist have in common?  They were all inducted to the Oklahoma State University College of Arts and Sciences Hall of Fame at a private banquet on Friday, September 9.  The College also recognized a Rising Star and 21 Distinguished Alumni.

Sarah Coburn (B.S. Music Education, ’99) has achieved international praise as an operatic soprano.  She has won numerous awards and has performed at many of the world’s most famous opera houses such as the Metropolitan Opera (where she performed alongside Placido Domingo), the Kennedy Center in Washington, D.C., and the Vienna State Opera.  Last year she released an album titled “Oh, When I Dream.”

Randy Couture (B.A. Foreign Language, ’92) earned the nickname “The Natural” after winning three Ultimate Fighting Championship (UFC) World Heavyweight championships and two UFC World Lightweight championships.  He was a three-time All-America wrestler at OSU, after spending six year in the U.S. Army, where his desire to study German sprouted.  Since retiring from the mixed martial arts (MMA), Couture has built a second career as a writer, broadcaster, and actor.  His autobiography “Becoming the Natural: My Life In & Out of the Ring” was a New York Times bestseller and he has appeared in all three installments of The Expendables blockbuster film franchise.

Bob Blackburn (M.A. History ’76, Ph.D. History ’79) has served as the executive director of the Oklahoma Historical Society since 1999.  He has written or co-authored 18 books and numerous articles, journal entries, and screenplays.  He is a steady source of historical information to the media and has appeared numerous times on the History Channel.  Blackburn was also instrumental in planning and building the Oklahoma History Center, a 215,000-square foot museum and research center. 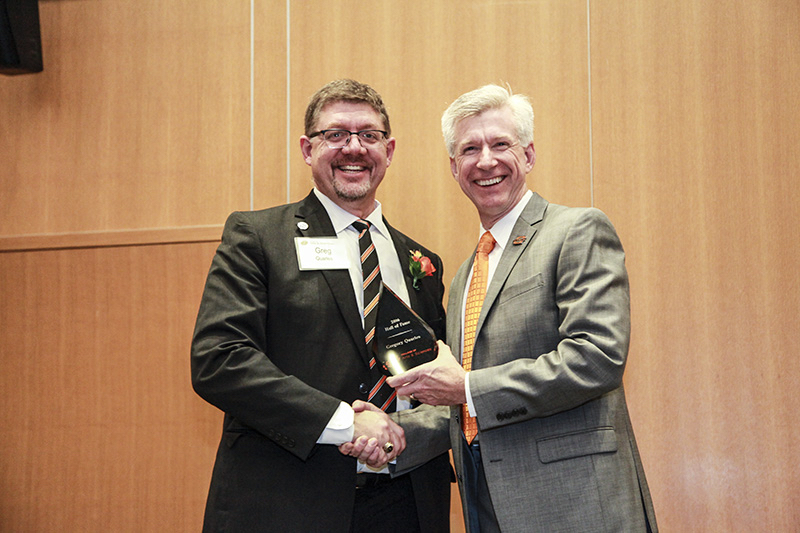 Gregory Quarles (B.S. Mathematics ’83, B.S. Physics ’83, M.S. Physics ’85, Ph.D. Physics ’87) is a renowned physicist with 25 years of experience driving cutting-edge laser, optics and photonics technology development and operations globally.  He has led strategic partnerships with multiple agencies including the Departments of Defense, Energy & Commerce, NASA and the U.S. Congress.  He has been honored for his innovative work in the progression of global materials research, specifically developing new laser devices for medical, military and industrial applications.

William Hua (B.S. Psychology ’06) works as a clinical health psychologist at the San Francisco VA Medical Center, providing integrated care services for veterans living with HIV/AIDS, hepatitis C and other infectious diseases.  He is also Chair of the Psychology Diversity Committee and concurrently an assistant clinical professor at the University of California San Francisco and an adjunct assistant professor at the University of San Francisco.  He is co-founder of a non-profit organization called Here to Hope, which focuses on promoting health and education for orphaned and vulnerable children living in Guyana, South America.

For more information, including full biographies of all the Hall of Fame, Rising Star, and Distinguished Alumni inductees, visit: http://ashonors.okstate.edu/

To view photos from the event, vist: https://flic.kr/s/aHskDzstyu