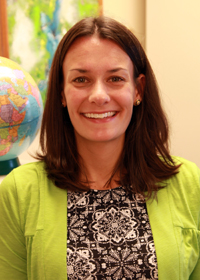 Oklahoma State University assistant professor of geography Amy Frazier is one of four authors of new a book detailing the shrinkage and decline of cities in United States.  Shrinking Cities: Understanding Shrinkage and Decline in the United States aims to provide an understanding of what the “city” has become and present analysis for future development.

“Our book has a heavy focus on not just explaining what shrinkage is and what it means but how to measure it quantitatively,” Frazier said.

Frazier is in her third year at OSU and her research, which centers on using GIS technology like remote sensing to analyze environmental and urban sustainability problems, began at the University of Buffalo, where she earned her Ph.D.  In conducting her research, she found shrinkage and decline as more of a neighborhood-to-neighborhood problem, not just city-to-city.

“We tend to look at shrinkage and decline as ‘that city has problems’ but as you dig deeper you see how heterogeneous it is,” Frazier said.  “A lot of people think it’s an all-or-nothing problem but you can have these pockets of prosperity right next to pockets of decline within the same city.”

The book represents just a sliver of her work, however.  In June Frazier began a two-year project funded by a $121,000 National Science Foundation (NSF) grant to determine if data collected from new technology about a landscape’s structure can be “downscaled” to fit existing data sets.  She is also involved in an interdisciplinary project with three other universities to use unmanned aircraft systems (UAS) to improve weather forecasting.

Though a native of Pennsylvania, Frazier has found a home at OSU, where she was recently presented the Junior Faculty Award for Scholarly Excellence by the College of Arts & Sciences.

“I think it’s a really great research culture here,” she said.  “I have had the opportunity to work on a lot of different projects I never would have imagined before I came here.”